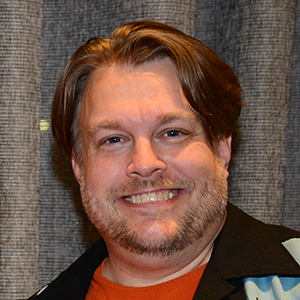 At Dragon*Con 2004, Dr. Demento declared "the great Luke Ski" to be his radio program's "Most Requested Artist of the 21st Century". Since then, Luke held onto that title by having songs on "The Dr. Demento Show's" annual year-end "Funny 25" countdown of his most requested songs of the year for 18 years in a row, including five of them at #1 ("Peter Parker" 2002, "Stealing Like A Hobbit" 2003, "Snoopy The Dogg" 2011, "Fake Adult" 2014, "Candybars" 2017). His song parodies, originals, stand-up and sketches about pop culture phenomena have made him a favorite performer at science-fiction and fandom conventions all across the Midwest and beyond. He's released eleven albums and 2 DVDs over the past 24 years, many of which feature collaborations and cameos by his fellow comedy musicians of the Funny Music Project (www.theFuMP.com), most significantly Carrie Dahlby, who often sings lead vocals on Luke's parodies of female musicians. His past hits among his fans include songs about Star Wars, Lord of the Rings, Spider-Man, Star Trek, Pirates of the Caribbean, Battlestar Galactica, Batman, Firefly, Doctor Who, Disney buying Marvel, Monty Python, with more recent hits about Scooby Doo, 80's media franchise mascots, being a 'fake adult', and stuggles with weight loss. He has won three awards at the Logan Whitehurst Memorial Awards For Excellence In Comedy Music (www.loganawards.com). The first for his Peanuts tribute, "Snoopy The Dogg", winning 'Outstanding Parody Song' of 2011, the second for his song about Disney buying Star Wars, "When You Wish Upon A Death Star" winning 'Outstanding Parody Song' of 2012, and the third "Candybars" about Luke's weight loss struggles winning 'Outstanding Parody Song' of 2017. And in 2013, Carrie Dahlby and the acts of the FuMP dot com surprised him at his Kickstarter event 'LukeSkiCon 2013' by presenting him with a 2-CD set full of their cover versions of Luke Ski songs spanning his whole career, titled "Worst Tribute Ever", featuring an introduction by Dr. Demento, where Dr D. reiterates that Luke Ski is still his show's most requested act of the 21st Century. He is the musical jester of sci-fi, the emissary of rap dementia, and a prominent bacon enthusiast. So join the Dementia Revolution, and become a Luke Ski fan today! www.thegreatLukeSki.com

"THE DR. DEMENTO SHOW" Still on the air, still the best show ever. Listen anytime at drdemento.com

Luke Ski worked as a writer, storyboarder, and voice-over artist on the Cartoon Network Original TV series "MIGHTY MAGISWORDS", created by Kyle A. Carrozza. Watch it now on Hulu!

(The opinions expressed here are mine alone.)

For more information on the great Luke Ski please visit the artist's web site at: http://www.thegreatlukeski.com

Be Amused By Me

Songs by the great Luke Ski

I Didn't Have Time To Rehearse This

When You Wish Upon A Death Star

I'm That Type Of Spy

It's A Fanboy Christmas 3 - Return Of The Magi

It's Good To Be The King

Gowron Said Knock You Out (2010 Edition)

My Parents Bought Me Intellivision

We're Goin' To The Dells (The Wisconsin Dells)

No Sleep Till Babylon

I Want To Be Steve Buscemi

Everybody Get Weird! (An Art Paul Schlosser remix)

It's A Fanboy Christmas II - The Wrath Of Claus

Holding Out For Hiro

What's Up With That?!

I Love You, TiVo (Acappella Mix)

My Name Is Not Merv Griffin